The contents of this website are currently being revised. Currently, the site shows the content of the former TU Kaiserlautern in many places. Supplementary contents of the RPTU in Landau can be found at www.uni-landau.de. 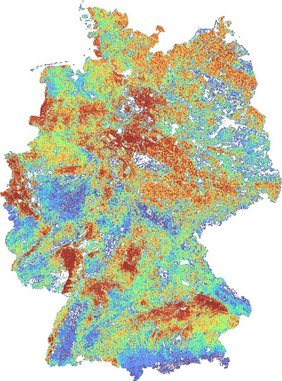 Pesticide risks in Germany have shown notable trends over the last 25 years, as a study of environmental scientists from the RPTU Kaiserslautern-Landau has recently found out.The risk for terrestrial vertebrates has decreased, whereas the risk for fish, terrestrial plants and soil organisms has increased. For other organism groups, the risk trends are inconclusive. These findings are of especially high interest at the moment, as the European Union plans to decrease pesticide risks by 50% by 2030.

If the countries of the EU want to reach the target, action must be taken: “To reduce pesticide risks at a national or continental scale, you can, for instance, use fewer amounts of pesticides or you can substitute some pesticides by the same amount of less toxic ones”, as Sascha Bub, the lead study’s author, explains the main hypothesis of the study. Based on this assumption, the Landau researchers have developed a simple method for risk assessment: “If you multiply amounts and toxicities of all pesticides used in a country in a year, and then sum up the multiplication products, you get a rough indicator of how risks develop. We call this indicator the total applied toxicity”. In fact, for different organism groups, the pesticides’ toxicities are very different, sometimes by factors of billions: some are especially toxic to pollinators, others to soil organisms or plants. The authors of the study, therefore, calculated the total applied toxicity for eight organism groups and 292 pesticides used in Germany between 1995 and 2019, using 1889 toxicity threshold values from the official EU pesticide registration.

The result: It turns out that in Germany, over the last 25 years, the total applied toxicity has decreased only for terrestrial vertebrates. For fish, terrestrial plants and soil organisms, on the other hand, the total applied toxicity has gone up. “The increase we see for soil organisms is worrisome, because they are of high importance for soil health. Increased risks for soil organisms might eventually affect agricultural productivity”, says Bub. The increase in total applied toxicity for fish is also critical, considering the long-term efforts undertaken to bring down pesticide toxicity for vertebrates, including fish. A previous study by the same research team for the USA has in fact shown that such measures can lead to a decreasing trend for fish.

The study also discusses the results in the context of the EU regulation on sustainable use of pesticides. This regulation targets a reduction of pesticide risks by 50% by 2030. “Any risk reduction goals need indicators to evaluate them”, says Ralf Schulz, senior author of the study. “We have compared the harmonized risk indicators, which are currently being used by the EU, and our total applied toxicity to understand why the former only indicate decreasing risk.” The scientists point out that the EU risk indicators do not differentiate among various organism groups, and put pesticides into fixed risk categories, instead of considering the individual toxicities of pesticides to various species. This makes them unsuitable as a risk indicator, according to the researchers from Landau. “With the application of the harmonized risk indicators, a key parameter of pesticide risk - toxicity - remains unconsidered”, underlines Schulz. “These indicators are not able to reflect the fact that pesticides become increasingly toxic for some organism groups – and, additionally, they are designed in a way that a reclassification of pesticides alone may lead to a decreasing trend. The EU has set ambitious goals to reduce pesticide risks, and the methods to assess these goals should be as sound as possible.”