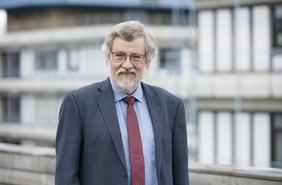 Physics professor Dr Burkard Hillebrands is honoured with the Achievement Award by the Magnetism Society of the international engineering association IEEE (Institute for Electrical and Electronics Engineers). With this award, the IEEE recognises his life's work in magnetism research: "For his pioneering contributions in the field of spindynamics, especially in magnonics". Hillebrands is the first German to receive this award. It can be considered the world's highest honour in the field of applied magnetism. Hillebrands holds the chair for magnetism at the Technical University of Kaiserslautern (TUK). In his research, he investigates, among other things, the properties and possible applications of magnon quantum particles and the material properties of magnetic nanosystems.

Professor Hillebrands has been researching the phenomenon of so-called macroscopic quantum states for a long time. His focus is on supercurrents and magnon quantum particles. These can transport information and consume significantly less energy in the process. The Kaiserslautern research team led by the physicist uses them in their work as fast information carriers and transporters. Hillebrands has founded a separate branch of research for this: supramagnonics.

This research could be relevant for technical applications: The processing and storage of data could become much more powerful with the particles in the future. For his work in this field, Hillebrands received, among other things, an ERC Advanced Grant in 2016, one of the highest endowed awards of the European Union.

The physicist is also involved in collaborative research centres (SFB). Together with colleagues from Kaiserslautern and Mainz, for example, he has been working since 2016 in the SFB "Spin+X: Spin in its Collective Environment" in an interdisciplinary way with chemists, mechanical engineers and process engineers on magnetic effects that are to be transferred into applications. From 2016 to 2017, Hillebrands was also Scientific Director of the Leibniz Institute for Solid State and Materials Research in Dresden. He is also one of the first members of the state research centre OPTIMAS (Optics and Materials Sciences) at TUK. In addition, he has been chairman of the Mathematical and Natural Sciences Class at the Mainz Academy of Sciences and Literature since 2017. He was recently accepted as a member of the European Academy of Sciences (EURASC).

The award will be presented to Hillebrands in May next year during the international conference on magnetism, INTERMAG, in Sendai, Japan. With over 400,000 members, the IEEE is the largest professional association in the world. Thematically, it is divided into 39 societies. They are each dedicated to a specific research area, such as magnetism.